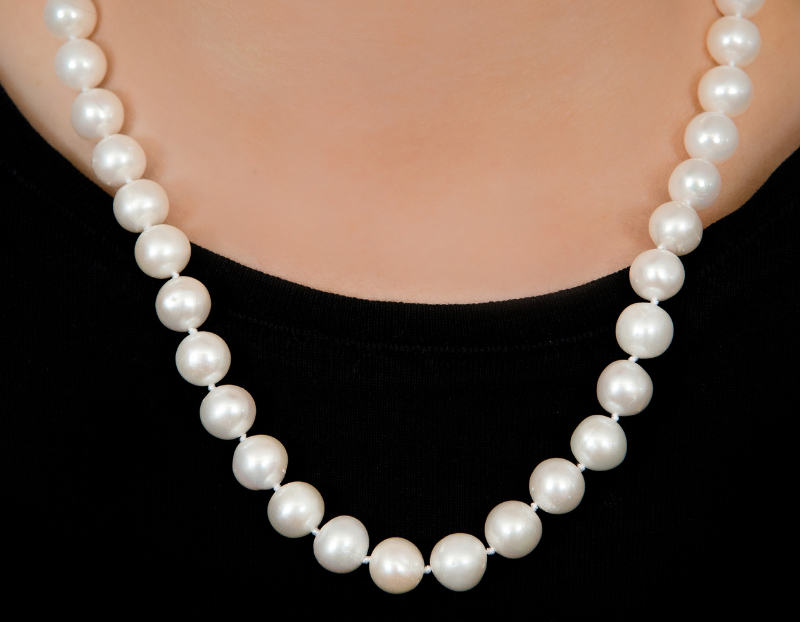 This is the story of one of my closest friends Annabelle which she related to me last week. She had asked me for a Pearl necklace for her daughter’s 18th Birthday. I asked a few questions about the size and style and we got talking. This was her story and why this necklace was so important to her. She said she would be happy for me to share it.

Annabelle had always been a shy girl and had lacked the confidence of other girls at school. She was happy to do her best and not to attract any attention. Although pretty she felt very conscious of her looks and that other girls called her chubby. Her school days stretched on endlessly in a blur of embarrassment and misery. When she finally left she took the first job going- working in an office. She worked hard, made friends, took up running and for the first time she felt her life was going in the right direction.

One day at work a new colleague arrived. Chris, was tall, good looking and very charming. He was popular with all the girls in the office who thought he was a nice bloke and always had time for a chat and a bit of a laugh.

One evening Annabelle was just finishing up and Chris asked her if he could help her carry her kit bag to the car. She agreed and was gratified with the attention from him. What followed was a 2 month charm offensive from Chris-small tokens left on her desk, waiting for her to finish work and to carry her bag out, requests for drinks and finally a date. Annabelle was swept off her feet and enjoyed being in the limelight and the envy of all her colleagues. She felt more confident and fulfilled and it all became official at the office Christmas party.

Life was good for Annabelle and although her parents had passed away she felt she had a soul mate in Chris. Things continued well until the summer and slowly over the next few months they began to change. The gifts and tokens stopped coming, demands for lifts to friends houses were made, Chris being busy doing other things became the norm. Gradually he started asking her to borrow money-just a few euro now and then till payday. Annabelle was still head over heels in love with him and just didn’t notice what was going on. He started telling her not to wear make up, as she was always “flirting at work”.

Within a few months Annabelle had changed dramatically. She looked pale and sad. She had put on weight as the running had stopped-Chris didn’t want her out running. It was as if she was in a trance and couldn’t see what everyone else could. She was being used and controlled by a manipulative, mean bully. By this stage Chris had managed to squeeze a few thousand euro from her. It all came to a head one night when he came to her apartment and asked for more money. Annabelle didn’t have any more to give. “ Well sell that bloody pearl necklace you’re always wearing, that’s got to be worth a few quid. I’ll be back tomorrow so have the cash.” And softening added” You know Annabelle your’e the only girl for me, you know I love you, Never leave me Annabelle”

It was the mention of the necklace which Annabelle’s mother had left her-and which she loved to wear to remind her of her mother and all the good things in life. It all exploded in her brain –“what am I doing? I don’t know who I am anymore”

That night she changed the locks, changed her phone number, and reclaimed her life. She left Chris a note saying he owed her €3,000 and would start legal proceedings if he ever came near her again. That was the end of Chris, he took a transfer and disappeared.

Annabelle went from strength to strength and never looked back. Met someone who was kind and thoughtful and went on to live a happy and fulfilling life.

Twenty years later, she came to me looking to buy a Pearl necklace for her daughter’s 18th Birthday and hoped that it would remind her daughter to be strong, to be true to herself and make her life what she wanted it to be, never what someone else wanted it to be.

This website uses cookies to improve your experience while you navigate through the website. Out of these, the cookies that are categorized as necessary are stored on your browser as they are essential for the working of basic functionalities of the website. We also use third-party cookies that help us analyze and understand how you use this website. These cookies will be stored in your browser only with your consent. You also have the option to opt-out of these cookies. But opting out of some of these cookies may affect your browsing experience.
Necessary Always Enabled
Necessary cookies are absolutely essential for the website to function properly. This category only includes cookies that ensures basic functionalities and security features of the website. These cookies do not store any personal information.
Non-necessary
Any cookies that may not be particularly necessary for the website to function and is used specifically to collect user personal data via analytics, ads, other embedded contents are termed as non-necessary cookies. It is mandatory to procure user consent prior to running these cookies on your website.
SAVE & ACCEPT